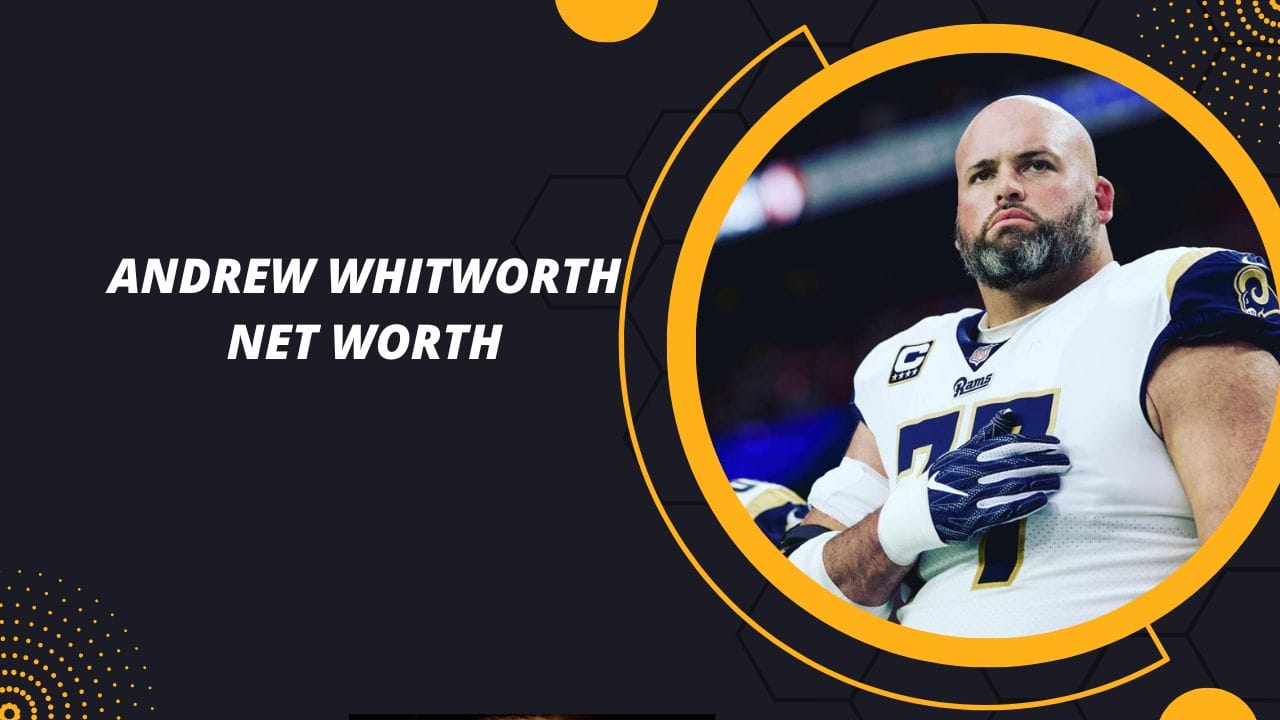 Former professional football player Andrew Whitworth has a net worth of $40 million. Andrew Whitworth earned slightly more than $105 million over the course of his 16 NFL seasons with the Cincinnati Bengals and the Los Angeles Rams. He played college football at LSU previously. Whitworth was selected to three Pro Bowls while playing for the Bengals and won Super Bowl LVI with the Rams.

Andrew Whitworth was born in Monroe, Louisiana on December 12, 1981. He attended West Monroe High School as a teen, where he played football for coach Don Shows. Whitworth was a member of three Louisiana Class 5A State Championship teams and four consecutive District Championship teams during his high school career. Additionally, he excelled at golf and was the state tennis champion.

Whitworth has four children with his wife Melissa, a reporter and former Miss Louisiana: Michael, Katherine, and the twins Sarah and Drew.

Whitworth has participated in a variety of philanthropic activities. He is the founder of the BigWhit 77 Foundation, through which he hosts a golf tournament in Louisiana to raise money for charity. In addition, Whitworth gives motivational speeches to youth groups in Louisiana and Greater Cincinnati. During the COVID-19 pandemic, he gave $250,000 to the Los Angeles Regional Food Bank in an effort to assist those in need.

The college attended by Whitworth was LSU. In 2002, as a redshirt freshman, he started every game after redshirting 2001. As a sophomore, he started in all 14 games and helped the LSU Tigers win the Sugar Bowl BCS national championship. In 2004, he and the Tigers played Iowa in the Citrus Bowl.

In 2005, as a senior, Whitworth contributed to LSU’s 11-2 record; he also helped the Tigers defeat Miami 40-3 in the Peach Bowl. Whitworth received first-team All-Southeastern Conference accolades in each of his final two seasons at LSU. In addition, his 52 career starts between 2002 and 2005 were second only to Oklahoma’s Derrick Strait’s 53 in the history of NCAA Division I.

The Cincinnati Bengals selected Whitworth with the 55th overall pick in the second round of the 2006 NFL Draft. In September, he made his NFL debut on special teams against Kansas City. The following week, Whitworth started at left guard against the Cleveland Browns and helped the Bengals gain 481 yards.

Whitworth signed a four-year extension with the Bengals through 2013 in the summer of 2008. Subsequently, head coach Marvin Lewis moved him from guard to left tackle, resulting in an almost immediate performance improvement. Whitworth started all 16 games during the season, allowed only five sacks, and was instrumental in facilitating Cedric Benson’s breakout season, in which he rushed for 1,200 yards.

In December of 2010, Whitworth caught a one-yard pass from Carson Palmer for the first touchdown pass of his career; this was also the first touchdown pass caught by a Bengals offensive lineman in 15 years. Among his other accomplishments with the Bengals in 2014, Whitworth allowed zero sacks and a single hit on quarterback Andy Dalton. In 2016, he concluded his Bengals career having been named to three Pro Bowls and one All-Pro first team.

Rams of Los Angeles and Retirement

In 2017, following 11 seasons with the Cincinnati Bengals, Whitworth signed a three-year contract with the Los Angeles Rams. He earned his fourth Pro Bowl selection in his first season with the team.

His second season was even better, as he helped the Rams advance to Super Bowl LIII by defeating the Dallas Cowboys in the Divisional Round and the New Orleans Saints in the NFC Championship Game. The Rams ultimately lost 3-13 to the New England Patriots.

Whitworth signed a new three-year contract with the Rams in April of 2020. During the following season’s Week 10 home game, a victory over the Seattle Seahawks, he suffered MCL and PCL injuries and was placed on injured reserve. Just prior to the 2021 postseason, Whitlock was reactivated in January.

In February, he helped the Rams defeat his former team, the Bengals, in Super Bowl LVI. This was the greatest accomplishment of his professional playing career. This was an especially memorable moment for Whitworth, as it was the final game of his 16-year NFL career; he retired in March 2022 as the NFL’s oldest defensive tackle.

Who is the Oldest Lineman in the NFL?

What is Andrew Whitworth’s net worth?

The estimated net worth of Andrew Whitworth is $40 Million.

What is Andrew Whitworth’s age?

What is Andrew Whitworth’s height?

Not only was he the sixth-best offensive line prospect in the country, but he was also a champion tennis player and talented golfer in high school. Andrew Whitworth’s net worth is approximately $40 Million as of August 2022.