Anna Nicole Smith, as Vickie Lynn Hogan, was born on November 28, 1967, in Houston, Texas, USA. She is best known as a model and socialite who married an octogenarian for his money and spent a lot of time in court after his death, which occurred two years after their wedding. It was in 2007 that Anna passed away. 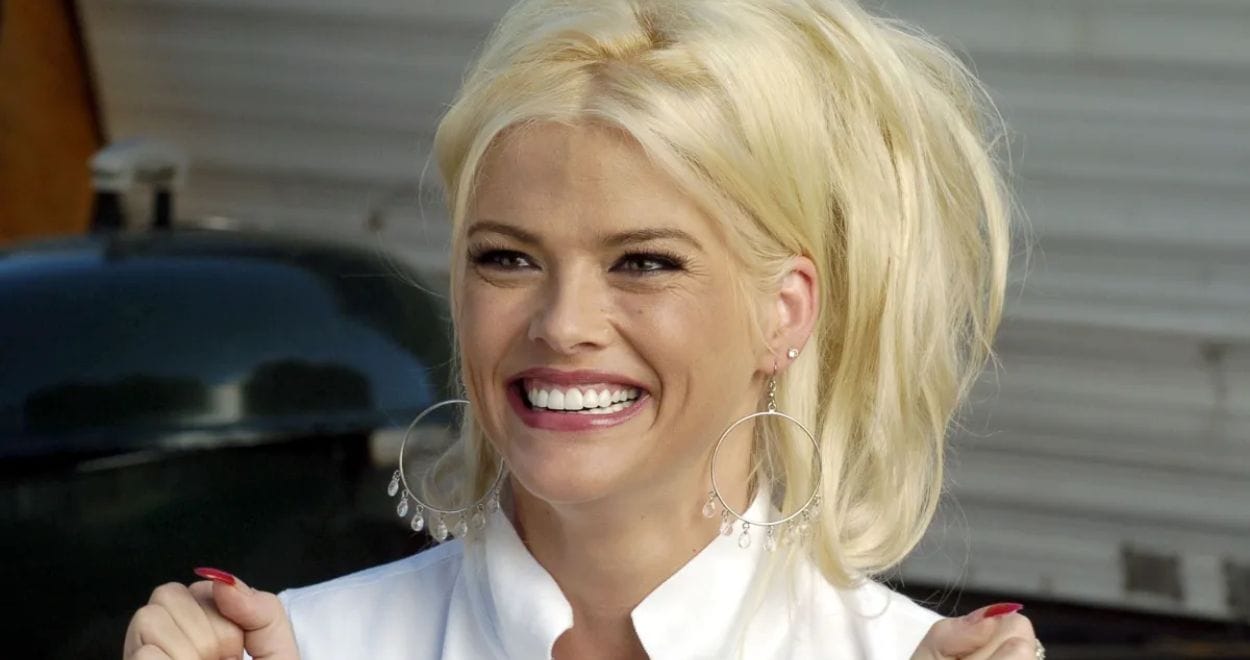 The 28th of November, 1967 found her being born as Vickie Lynn Hogan in Houston, Texas. Smith was raised by her mother and aunt, and together they are responsible for her and her five half-siblings. Initially from Houston’s Aldine High School, Anna transferred to Mexia High School, where she stayed until the middle of her second year before deciding to withdraw.

Anna looked up to Marilyn Monroe when she was a young woman. Before becoming a single mother at the age of 20, Anna performed as an exotic dancer in Texas.

Playboy published her debut as Vickie Smith in March 1992. She was featured as the Playboy Playmate of the Month in the May 1992 issue. An entire year later, she was honored as the best playmate in the country. After that, Smith signed on to take Claudia Schiffer’s place as the face of Guess jeans.

During this time, she adopted the Anna Nicole Smith moniker. Smith became famous all around the world after seeing her photo on huge billboards in Sweden and Norway, where she had appeared for the Swedish firm H&M. Germany’s Marie Claire magazine featured her on its cover, too.

White Trash Nation was the title of an August 1994 edition of New York Magazine that included a photo of Smith. She’s shown in the picture crouching in a skirt and white cowboy boots while munching on chips. Insisting that Smith had not given permission for the magazine to use her likeness, her attorney filed a $5 million lawsuit against New York Magazine.

Anna was a successful model, although she was less well-known for her acting roles. Her first film was the screwball comedy The Hudsucker Proxy from 1994.

Next, she was cast in a more substantial role as Tanya Peters in “Naked Gun 33 1/3: The Final Insult,” which brought her positive reviews and modest box office success in 1994.

Hollywood studios frequently cast her in the role of the stereotypical “ditzy stupid blonde,” which she found distancing. To the Limit,” from 1995, saw her portraying Colette Dubois in a more serious role. Despite the film’s widespread promotion and massive budget, “To the Limit” was bombed at the box office because of Smith’s poor performance.

She hoped that a main role in the 1996 low-budget direct-to-film movie “Skyscraper” would jumpstart her cinematic career, but the film was a failure. Beginning in the ’90s, she began actively pursuing television opportunities. In addition to one episode of “Ally McBeal,” she was in “Sin City Spectacular” and “Veronica’s Closet.”

According to Celebrity Net Worth, Anna Nicole Smith was an American model, actress, and TV personality with a net worth of $1 million at the time of her death. Anna Nicole Smith became well-known after she was named the Playmate of the Year in 1993. She became even more well-known as a reality TV star and a model for H&M, Lane Bryant, and Guess Jeans.

In 1985, Anna Nicole Smith was honored with the title of Playmate of the Year. When she was only 17 years old, she wed Billy Wayne Smith, who worked as a cook at Jim’s Krispy Fried Chicken restaurant. In 1993, Anna and Billy Wayne ended their marriage and divorced.

In 1994, she tied the knot with J. Howard Marshall, a business magnate in the oil industry who was 62 years her senior. In 2006, her son Daniel passed away as a result of an overdose of a combination of medicines that included methadone and antidepressants.

How much did Anna Nicole’s estate worth when she died?

At the time of her untimely death, American model, actress, and TV personality Anna Nicole Smith was worth $1 million.

When Anna Nicole Died, Her Child Was How Many Months Old?

The late model and actor Anna Nicole Smith, who died of an overdose in 2007, is co-owner of the house where Birkhead and his family live, known as Dannielynn. Dannielynn was just 5 months old when she passed away.

When did Anna Nicole’s daughter disappear?

In 2006, at the age of twenty, Daniel passed away from a heroin overdose. “Your love is still with us today,” Birkhead wrote, “in the form of a genuinely one-of-a-kind teenager who shares her mother’s smile, beauty, and fortitude.” Much appreciation for all who support Anna and her legacy. The world adores Anna Nicole Smith.

In 1985, Anna Nicole Smith was honored as the year’s Playmate of the Year. Even though she was only 17, she wed Billy Wayne Smith. Drug overdose claimed the life of her son Daniel in 2006.

After her passing, a custody and paternity fight erupted over her daughter, Dannielynn. On February 8, 2007, she was discovered dead in her hotel room.

Drug overdose from multiple sources was determined to be the cause of her death. Howard Stern, her boyfriend, had prescribed eight of the eleven medicines that were discovered in her system.

In 1985, Anna Nicole Smith was named Playboy’s Playmate of the Year. In 1994 she tied the knot with oil sector mogul J. Howard Marshall. Her son Daniel died in 2006 after a drug overdose that included methadone and antidepressants.