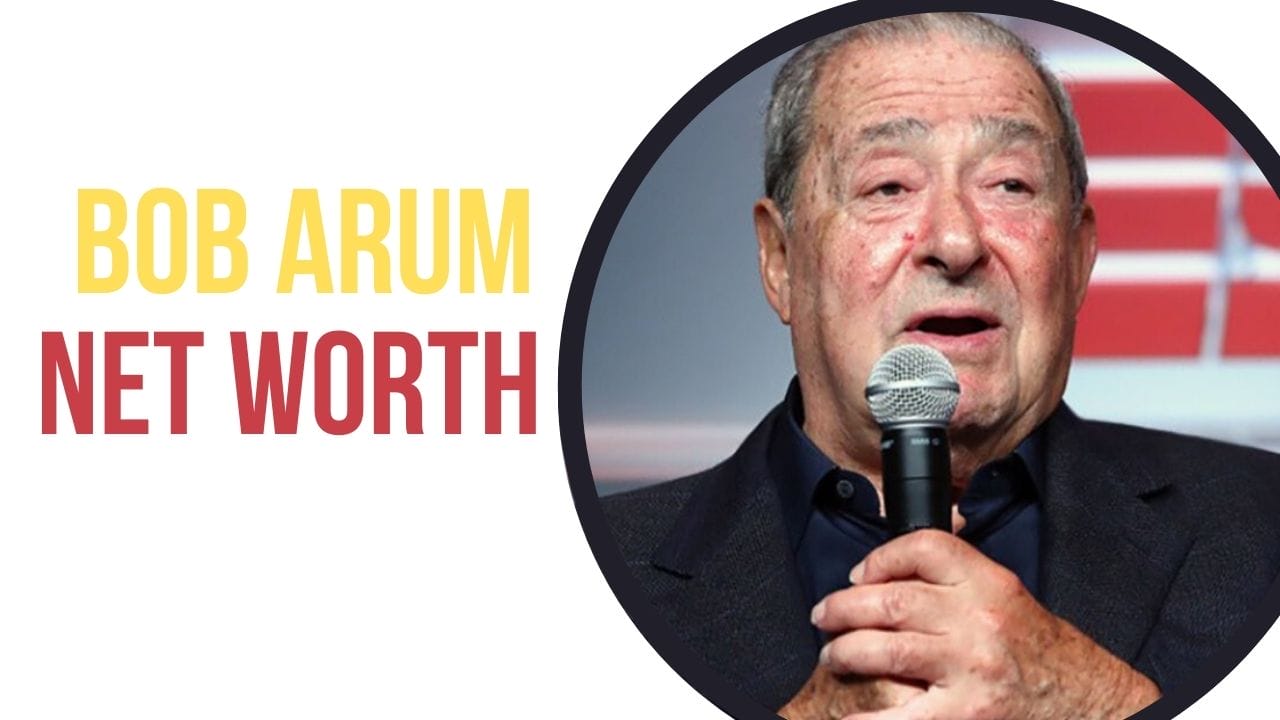 Bob Arum Net Worth: How Does Bob Arum Make Money?

Arum, Bob Bob Arum is a professional boxing promoter with a $300 million net worth. Arum is best known as the founder and CEO of the boxing promotion firm Top Rank. However, he began his career as an attorney with the United States Attorney’s Office for the Southern District of New York. Following his law career, he entered the boxing scene and quickly rose to prominence.

A career in Law

Arum began his career as an attorney in the Department of Justice during the Kennedy administration but shifted his focus after both John and Robert were slain in the 1960s.

Bob then found work as an attorney for several Wall Street firms, including Phillips, Nizer, and Krim & Ballon. He did an investigation into the details of Kennedy’s assassination during this period, finally assisting senior partner Louis Nizer in the creation of the Forward to the Warren Commission Report. Arum was well aware, however, that a legal career would not work for him, as he was witnessing far too many fatalities daily.

Not only were Robert and John Kennedy slain during his tenure at the Justice Department, but Floyd Cramer’s high-profile suicide in 1963 encouraged him to pursue other employment opportunities. Cramer, president of Washington Heights Savings and Loan Association, had been indicted soon before his suicide for conducting a mortgage tax fraud scam. This, Arum subsequently maintained, convinced him that he was not “cut out” to be a prosecutor. Having said that, Bob continued to practice civil law until 1979, while also dabbling in boxing promotion.

A career in boxing

Arum began his involvement with the boxing profession in 1962 when he was assigned by the Department of Justice to confiscate the earnings of a fight between Sonny Liston and Floyd Patterson. This event introduced him to Lester M. Malitz, a pioneer in the field of CCTV who was also a boxing promoter at the time. Arum then took over the role of Malitz’s attorney.

It wasn’t long before Bob established himself as a boxing promoter. Arum met Jim Brown and Muhammad Ali, who showed him how to run a successful boxing promotion.

Bob was eventually appointed vice president and secretary of Ali’s promotion firm, Main Bout. During these early years, Bob co-owned the company with Mike Malitz, Lester Malitz’s son, and Jim Brown. Bob had accumulated the required expertise during the 1980s to establish himself as a highly influential person inside the boxing scene.

He planned a number of the sport’s most notable bouts, including Marvin Hagler’s contests against Roberto Durán and Thomas Hearns. He produced the legendary rematch between Thomas Hearns and Sugar Ray Leonard in 1989. 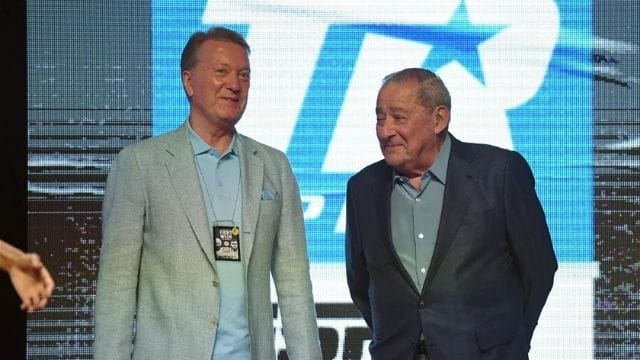 He worked extensively with renowned fighters including Michael Carbajal, Oscar De La Hoya, Manny Pacquiao, and Erik Morales during the 1990s. Arum concentrated on Hispanic competitors in the 2010s and beyond, noting boxing’s enormous popularity in the Hispanic population. As a result, he frequently performs in places with sizable Spanish-speaking populations.

Miguel Cotto, Antonio Margarito, and WBC super featherweight world champion Jose Valdez are among his recent boxing heroes. Bob Arum was elected into the International Boxing Hall of Fame in 1999.

Arum has been embroiled in a slew of controversies during his career. His meteoric ascent to prominence pitted him against another great boxing promoter, Don King. He and Dana White have had their share of disagreements over the years as well. He admits paying IBF president Robert W. Lee $200,000 in two installments in 2000 as a bribe to fight approved.

Arum was only sanctioned and fined by the Nevada State Athletic Commission as a result of his testimony, while Lee was charged with racketeering.

In 2001, Oscar De La Hoya successfully sued Arum and was released from his Top Rank contract.

The FBI raided Top Rank’s Las Vegas office in 2004. Arum was on vacation at the time, and the FBI purportedly investigated accusations that Top Rank was attempting to manipulate an upcoming fight. The investigation was concluded in 2006 with no charges brought.

Floyd Mayweather Jr. accused Arum in 2007 of underpaying and manipulating him during his early career. Floyd later declined to comment on the matter. 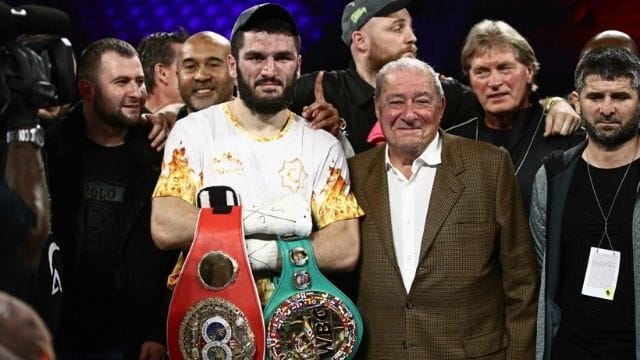 Arum sued HBO once for attempting to become a boxing promoter and so destroying his business. Bob indicated that HBO was incorrect in terminating Mayweather’s exclusive deal, and the situation was resolved amicably. Although the lawsuit was finally settled out of court, Arum continued to criticize HBO, claiming that boxing promoters did not require the network.

Bob Arum accused the state of California of racism in 2009 after the state revoked Antonio Margarito’s boxing license for wearing unlawful hand wraps. That same year, he was accused of racism after referring to UFC supporters as “skinheads.”

Bob Arum has reportedly hosted over 9,000 bouts since they began. These were from 1,500 events held in 22 countries. This demonstrates the global brand that Top Rank has developed over the years.

Additionally, Top Rank was the first promotional business to broadcast a live event on HBO. Additionally, Bob Arum was instrumental in promoting Floyd Mayweather vs. Manny Pacquiao, the most lucrative single-night athletic event in history.

Bob Arum’s 2021 boxing agenda is jam-packed as Tyson Fury’s co-promoter. He’ll need to organize a huge bout between Fury and Joshua. Other fighters under Arum’s management, such as Terence Crawford, are also on the verge of high-profile bouts. As a result, Arum’s 2021 will be a special treat for fans. 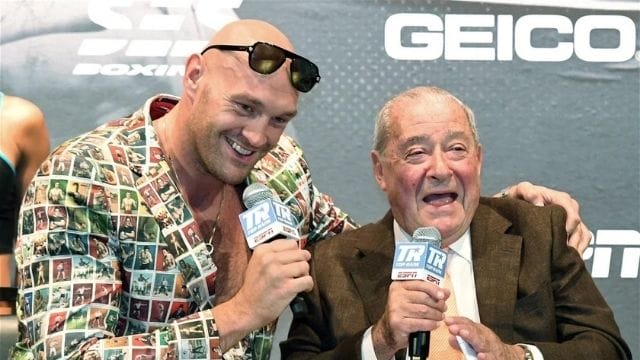 Arum is estimated to have a net worth of $300 million in 2021 by wealthypersons.com. Despite being a fully qualified lawyer, he earns the most of his money through his boxing promotion company, Top Rank. And his Mayweather-Pacquiao bout, as said previously, is easily the most lucrative event of his career.

Additionally, the American set arranged other high-profile bouts, like Marvin Hagler vs. Roberto Duran and Hagler vs. Thomas Hearns. He previously represented Manny Pacquiao, Oscar De La Hoya, and others.

Given Arum’s upcoming contests in 2021, we anticipate this value to increase even further for the renowned boxing promoter.

How Does Bob Arum Make Money?

Despite being a fully qualified lawyer, he earns the most of his money through his boxing promotion company, Top Rank. And his Mayweather-Pacquiao bout, as said previously, is easily the most lucrative event of his career. Additionally, the American has arranged for additional high-profile bouts, including Marvin Hagler vs. Roberto Duran and Hagler vs.

The Boss Baby Back in the Crib Season 1 Release Date and Time:when Is It Coming Out?