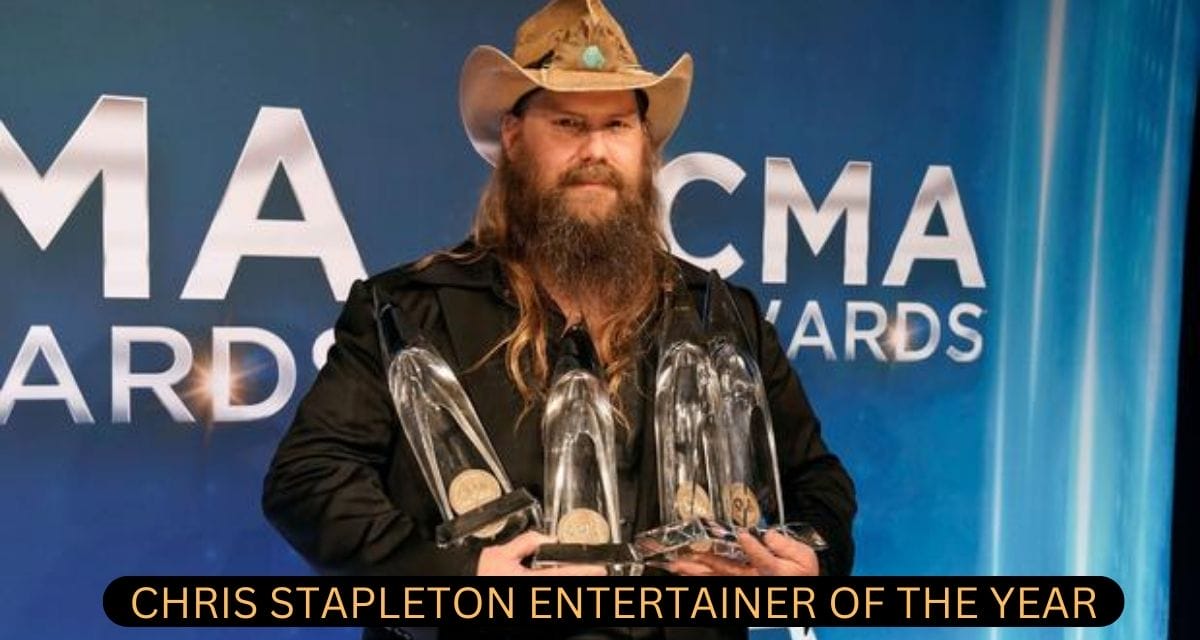 American singer-songwriter, guitarist, and record producer Chris Stapleton. Subsequently, Stapleton acquired a contract to write and publish his songs with Sea Gayle Music. Artists such as Adele, Luke Bryan, and Tim McGraw have included more than 150 songs in their albums.

He has also co-written six country songs that reached number one. Chris Stapleton’s projected net worth as of November 2022 is $12 Million.

At the 2022 CMA Awards, nominee for Entertainer of the Year Chris Stapleton brought out five-time CMA winner Patty Loveless for a devastating performance of “You’ll Never Leave Harlan Alive.” The purpose of the performance was to honor the state of Kentucky, where both vocalists were born and reared, and to draw attention to the state’s historic challenges with flooding earlier this year.

Before Loveless’ powerful voice took over, the performance began gently, with only muted instruments. As the intensity of the song increased, so did the urgency in her voice, imbuing the narrative about the economic problems and human costs of coal mining villages with a gloomy, melancholy tone. Stapleton occasionally howled and growled, but he largely deferred to a true country legend.

Loveless covered “You’ll Never Leave Harlan Alive” by Darrell Scott for her 2001 album Mountain Soul, a stripped-down album that highlighted her bluegrass and old-timey origins. In October, Loveless and Stapleton performed the song together at the Kentucky Rising concert, a fundraiser for flood relief in Lexington.

At the 2021 CMA Awards, Stapleton was a great winner. He was nominated for numerous accolades at the 2022 ceremony and went on to win Male Vocalist of the Year. His sole remaining live performance for 2022 is scheduled for November 12 at Mercedes-Benz Stadium in Atlanta, alongside Miranda Lambert, Dwight Yoakam, and Katie Pruitt. He is scheduled to perform at Luke Bryan’s Crash My Playa in Cancun, Mexico, in January.

Christopher Alvin Stapleton was born in Lexington, Kentucky on April 15, 1978. His mother, Carol J. Stapleton, was employed by the local health department.

Stapleton grew up with his older brother, Herbert Joseph III, and younger sister, Melanie Brooke, in the small hamlet of Staffordsville. He received his diploma from Johnson Central High School.

In 2001, Stapleton relocated to Nashville, Tennessee, to pursue a career as a composer. Within four days following his arrival in Nashville, he signed a publishing deal with Sea Gayle Music. Over the following decade, he penned numerous successful songs for prominent artists such as Kenny Chesney, George Strait, Luke Bryan, and Thomas Rhett.

Many of the country songs he co-wrote achieved the number-one spot on the charts and remained there for weeks.

Stapleton joined Mercury Nashville in 2013 to pursue a solo career. Many of Stapleton’s songs have been featured on the soundtracks of notable films such as “Valentine’s Day,” “Alvin and the Chipmunks: The Road Chip,” and “Hell or High Water.”

In 2016, he appeared alongside Kacey Musgraves, Andrew Combs, and Eric Church at the Country to Country festival in Europe. On an edition of ‘Saturday Night Live,’ he also sang ‘Parachute’ and ‘Nobody to Blame’ from ‘Traveller.’

The next year, Sir Elton John requested that Stapleton perform “I Want Love” on one of his CDs entitled “Restoration: Reimagining the Songs of Elton John and Bernie Taupin.”

As of August 2022, Chris Stapleton’s estimated net worth is approximately $12 million.

Chris Stapleton completed his secondary education at Johnson Central High School. Chris traveled to Tennessee shortly after graduating from high school to study engineering at Vanderbilt University. Nonetheless, he quit the university after only one year. She began creating songs and singing shortly thereafter.

Which Residences Does Chris Stapleton Own?

According to The Tennessean, Chris Stapleton and his family will move to a vast estate in Williamson County, Tennessee.

The Stapletons chose a property of slightly over 311 acres near Leiper’s Fork, Tennessee, as their new home and a place to explore the magnificent hill country.

Stapleton, who paid over $5.5 million for his big home, chose a place near Justin Timberlake, a former ‘N Sync member and pop icon with whom he has a long-standing connection and musical partnership.

Chris Stapleton is a very successful and wealthy individual who owns numerous assets in the United States. He also owns numerous real estate properties, including homes in Kentucky, Tennessee, and Los Angeles, among others. Chris Stapleton has a couple of other assets, which are not particularly common.

Automobile assortment – Chris Stapleton A collection of automobiles that contains some of the most unusual and expensive models. Chris is the proud owner of a stunning red Range Rover and a black Chevrolet Impala. His garage contains a Mercedes-Benz as well. Chris Stapleton enjoys driving automobiles alone.

In 2003, Stapleton met Morgane Hayes in the same building where they both worked as songwriters. Morgane visited her boyfriend at Sea Gayle Music in the hopes of running into him.

After a few months, he asked her to collaborate with him on a song. In 2015, she told The Washington Post, “That was our first date.” We did not produce much writing that night.

Since their 2007 wedding, the couple has been nearly inseparable. They have four children, twin boys born in April of this year. The entire family vacations together. Morgane, a brilliant musician in her own right, collaborates with Stapleton on many facets of his creative process.

“You are my sunshine” is engraved on Stapleton’s wedding band, and he and Morgane frequently perform the song together on stage.

What Honours Has Chris Stapleton Earned?

In the fall of 2015, Stapleton became the first artist ever to win Album of the Year, Male Vocalist of the Year, and New Artist of the Year at the Country Music Association Awards for his duet with Justin Timberlake on the George Jones classic “Sweet Home Alabama.” In 2016, he garnered four nominations and two awards from the Grammy committee: Best Country Solo Performance and Best Country Album for Traveller.

In 2018, he was nominated for an additional three Grammys for From a Room, Volume 1: Best Country Album, Best Country Song for “Broken Halos,” and Best Country Solo Performance for “Either Way.” In memory of Tom Petty, he also sang “Wildflowers” alongside Emmylou Harris during the awards show.

What is Chris Stapleton’s total wealth?

Chris Stapleton has an estimated $12 million in total net worth.

What is Chris Stapleton’s age?

What is Chris Stapleton’s Salary?

What is Chris Stapleton’s Height?

What is Chris Stapleton’s wife’s name?

Morgane Stapleton is the wife of Chris Stapleton.

Chris Stapleton is a phenomenon whose works are recognized throughout the world. Chris’s contributions to the music industry have been lauded, and he has also been honored.

He is a global icon with devotees all over the world. His music has a flavor that is both deep and rich. His songs are popular with all age groups, which is quite a feat. Chris has a gorgeous family consisting of his wife and five children. Chris appreciates every second of his existence.