DC’s “Doom Patrol” started after the team was first shown in the fourth episode of Season 1 of “Titans.” “Titans” was a gritty and dark take on the famous young team of heroes and former sidekicks in the DC Universe who wanted to go out on their own to protect the innocent. Some of the characters in “Titans,” like Robin, are well-known, but “Doom Patrol” has some characters that casual DC fans might not know.

Fans watched Negative Man (Matt Bomer), Cyborg (Joivan Wade), and Robotman (Brendan Fraiser), along with the rest of the Doom Patrol team, take on the Brotherhood of Evil and finally accept their roles as heroes. The show’s third season ended in early November.

During Seasons 1 and 2, fans saw each member of the team struggle with their demons and past traumas that led to their special abilities. It was also revealed that the team members didn’t just get their abilities by chance, but that Chief/Doctor Niles Caulder (Timothy Dalton) planned for everything to happen to them.

In Season 2, everyone had to find The Chief again so that they could save one of their own. Season 3 ended on a pretty good note, so what kind of challenges will Season 4 bring, now that the team is getting along better? Here is what we know so far about Season 4 of “Doom Patrol.”

What Is the Release Date of Season 4 of Doom Patrol?

Variety and the 2021 DC FanDome Event on October 16, 2021, where the cast of “Doom Patrol” decided to quickly drop in to let fans know that they had been officially renewed for a fourth season, both say that the show is likely to start sometime in 2022.

Even though there has been no official confirmation of a release date, it seems likely that “Doom Patrol” will come out on HBO Max in the summer or fall of 2022. “Titans” has also been picked up for a fourth season, which will air sometime in 2022. (via Variety). “Doom Patrol” and “Titans” are usually both released in the summer and fall. 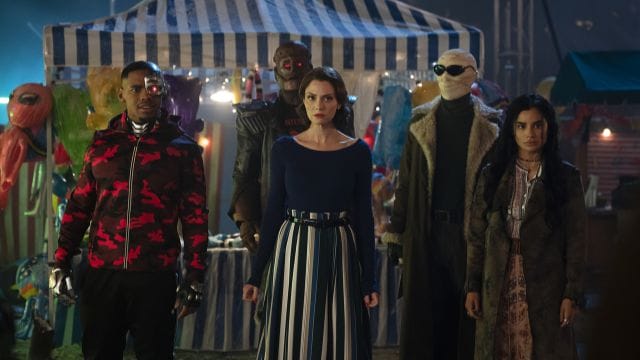 “Titans” and “Doom Patrol” are just two of the many original shows that DC has on HBO Max. The streamer is also making a “Batgirl” movie with Leslie Grace and a “Peacemaker” series with “Suicide Squad” star John Cena.

Who Is in the Cast of Season 4 of Doom Patrol?

So far, the official cast list for Season 4 of “Doom Patrol” has not been made public. But there haven’t been any rumors that any of the main cast members are leaving. So, if the same cast from Season 3 is set to come back, fans can expect to see Brendan Fraiser, Matt Bomer, Diane Guerrero, April Bowlby, Joivan Wade, Skye Roberts, and Michelle Gomez as their characters in Season 4.

The fact that the “Doom Patrol” team feels more united and heroic than ever at the end of Season 3 makes it likely that the whole cast will return. But it’s not clear if Timothy Dalton will come back because his character seemed to die for good in Season 3.

As of right now, there have been no rumors about new characters or cast members for Season 4. Since the Doom Patrol will have to deal with new threats, there will likely be new bad guys. As the new year starts, more information will likely be made public.

What Is the Plot of Doom Patrol Season 4?

The plot of Season 4 of “Doom Patrol” hasn’t been officially confirmed, but because of how Season 3 ended, the team will likely take on bigger missions now that they’ve accepted their role as a kind of super-team. There’s a chance that recurring characters like Dorothy (Abi Monterey) and the Dead Boy Detectives will show up again.

Season 3 didn’t finish talking about a lot of things, like Robotman’s new body, Rita’s potential to become a villain now that she’s accepted her darker side, and Laura De Mille’s struggles to be a real hero. In Season 4, the “Doom Patrol” team is likely to have to deal with the new responsibilities they have as a super-team, such as finding the best ways to work together as a team. Season 4 of “Doom Patrol” will start next year. We will learn more about it next year.

Where to Watch Season 4 of “Doom Patrol”

Seasons 1-3 of Doom Patrol can be streamed right now on HBO Max. Season 4 can only be watched on HBO Max.

Rita Farr, played by April Bowlby, experiments with being bad throughout the third season of Doom Patrol. She finally gives in to her evil side when she kills the Brain with boiling water while he is still in Robotman’s body.

Even though she eventually faces off against Laura De Mille and seems to stop being bad because Laura tells her that killing her isn’t worth going down that path, Rita’s morals and loyalty are still unclear. Rita still doesn’t seem to believe that Laura has changed for the better, and it doesn’t take much imagination to think that something could push her over the edge and make her a villain again.

Also, Rita seems to have kept from the rest of the Doom Patrol the fact that she killed the Brain and lost Robotman’s body parts. When these things are finally found out, they are likely to cause a split in the team.

Even though Doom Patrol doesn’t usually have a simple view of good and evil as black and white, season 4 needs to answer the question of whether Rita will eventually cross that line again and possibly betray the Doom Patrol for her reasons.