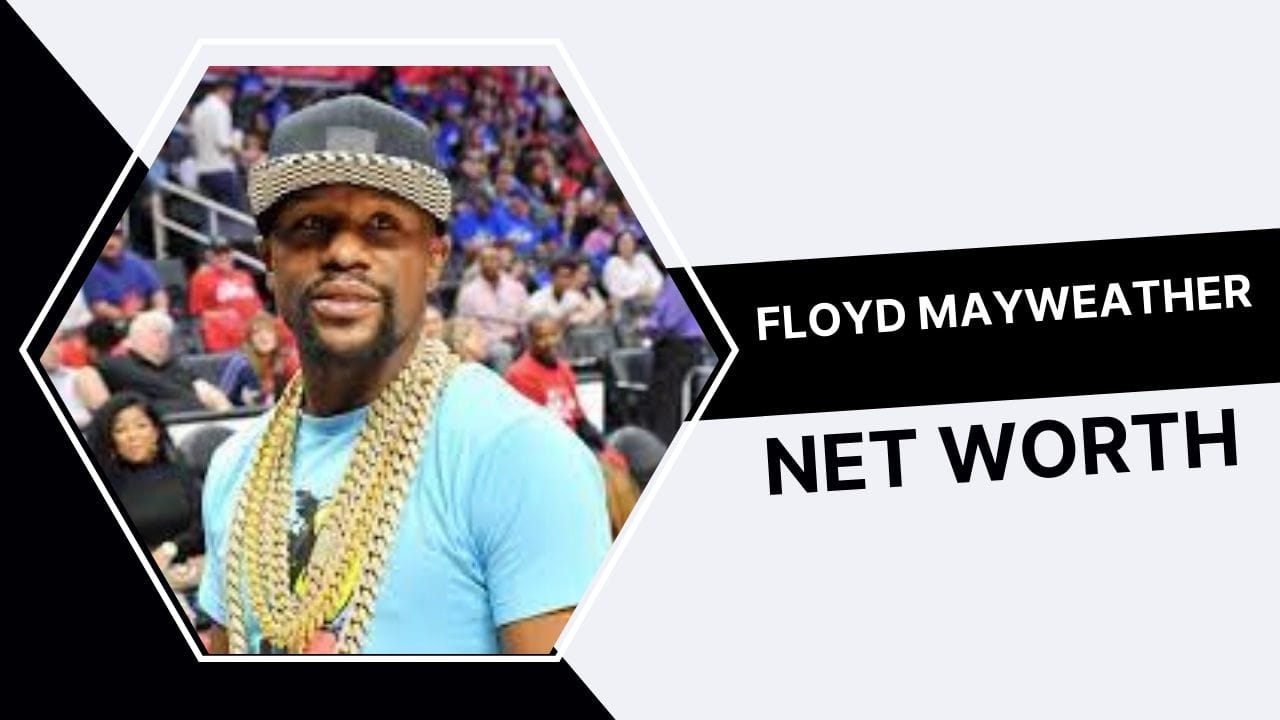 Floyd Mayweather is an American boxing champion and promoter of international acclaim. The net worth of Floyd Mayweather is $450 million. This makes him the wealthiest boxer in history. As of this writing, Floyd’s overall career earnings surpass $1.1 billion.

Floyd is the fifth highest-paid athlete in history and one of only six athletes whose lifetime earnings have exceeded $1 billion. Michael Schumacher ($1 billion), Jack Nicklaus ($1.15 billion), Arnold Palmer ($1.35 billion), Tiger Woods ($1.65 billion), and Michael Jordan ($1.9 billion) are the other five highest-earning athletes.

Floyd gained more than $500 million from only two fights. In 2015, he earned $250 million for his battle against Manny Pacquiao. In 2017, he earned $300 million by fighting Conor McGregor.

In a notorious incident with an ESPN reporter in 2013, just before his fight with Saul Alvarez, Floyd displayed his bank account balance. Floyd proudly exhibited his $123 million checking account balance.

Floyd was consistently (and by a wide margin) the best-paid athlete in the world during his prime boxing years. Floyd can easily earn $150 to $300 million per year when he is fighting, even though he has few endorsement deals.

As a child, Floyd’s mother was an addict and his father was largely absent. Floyd’s father spent most of his time with him when he was old enough to go to the boxing gym. Floyd moved live with his grandmother when his father was put in prison. During this period, Floyd was devoted to boxing. He abandoned high school and turned to become an amateur.

Floyd won three national Golden Gloves titles between 1993 and 1996. He won a bronze medal at the 1996 Olympics in Atlanta. His amateur record stood at 84-4.

Floyd’s debut bout as a professional took place on October 11, 1996. His opponent, Roberto Apodaca, was knocked out in the second round.

Floyd won a record-breaking six boxing championships in five different weight classes throughout his career: Super Featherweight, Lightweight, Junior Welterweight, Welterweight twice, and Super Welterweight. As of this writing, his professional boxing record is an astounding 50 victories and 0 losses. 27 of the fifty victories were by knockout.

On March 13, 2009, Floyd Mayweather was due to face his most formidable opponent to date, Manny Pacquiao. Probably the most anticipated fight in the previous decade. At the time, it was anticipated that pay-per-view sales would top $180 million. Floyd was to be guaranteed $25 million upfront and an extra $20 million to $25 million in the future. Unfortunately, Mayweather and Pacquiao were unable to agree, and the match was postponed for years. Floyd defeated “Sugar” Shane Mosley on April 1, 2010, and Victor Ortiz on 2011. On May 5, 2012, Floyd Mayweather won over Miguel Cotto.

Floyd received an estimated $50 million ($32 million guaranteed) on May 4, 2013, for defeating Robert Guerrero. Floyd received $75 million ($41.5 million was guaranteed) on September 14, 2013, when he fought Saul Alvarez. That was the highest purse in the history of boxing. This record will be easily surpassed when Floyd finally confronts Manny Pacquiao on May 2, 2015.

Mayweather vs. Pacquiao was finally held in Las Vegas on May 2, 2015. It is anticipated to be the most lucrative fight in boxing history. Floyd and Manny agreed to a 60-40 split of all revenues. Floyd received $250 million as a result of the fight. Pacquiao made 150 million dollars.

Floyd Mayweather fought Conor McGregor on August 26, 2017, in the highest-grossing Pay-Per-View boxing event in history. There were at least 5 million PPV purchases for the event. After all, was said and done, the fight earned approximately $700 million in total revenue from all sources, leaving Mayweather with a $300 million payment before taxes.

As a resident of Nevada, he did not pay state income tax on those earnings. Approximately forty percent of his revenues were sent to the IRS. In reality, he paid forty percent of his earnings plus twenty-two million dollars in unpaid taxes relating to his 2015 income. In the end, his net income after taxes was $160 million. Floyd’s post-McGregor net worth, when combined with his previous net worth, was $560 million.

Floyd fought YouTuber Logan Paul in an exhibition match in June 2021. Floyd was guaranteed $10 million-plus 50% of Pay-Per-View earnings. The PPV was purchased by around 1 million individuals, generating $50 million in revenue. Consequently, Floyd made a total of $35 million.

Floyd participated in Dancing with the Stars in 2007. They placed ninth overall. Floyd got $20 million in 2008 to participate at WrestleMania XXIV.

Floyd owns lots of luxury vehicles. He allegedly told an ESPN journalist that his garage is filled with luxury vehicles worth $15 million that had never been driven. Floyd has purchased over 100 vehicles from Towbin Motorcars in Las Vegas over the past two decades. He pays cash for his vehicles.

Among his most valuable automobiles are a $5 million Koenigsegg CCXR Trevita, a $3.5 million Bugatti Chiron, and THREE $2 million Bugatti Veyrons, a Bugatti Grand Sport Vitesse, a $1.4 million Pagani Huayra, and a special edition LaFerrari Aperta valued at over $1 million. This is only a small portion of his extraordinary collection. Floyd owns numerous further Ferraris, Lamborghinis, Bentleys, Rolls Royces, and Mercedes.

Air Mayweather is a $60 million Gulfstream G650 that Floyd owns. In 2018, he purchased the jet for himself for his 41st birthday. He traveled to Iceland solely to snap an Instagram shot as a dare. The plane is inscribed with his name and his boxing record, “50 – o,” on the wingtips.

Floyd owns two private jets. The second is a Gulfstream III worth $30 million. Floyd travels in the G650 with his closest associates, while “Air Mayweather II” follows after with the rest of his entourage.

Floyd uploaded a snapshot of himself in front of his primary jet and seven cars in January 2015. In total, he was surrounded by “toys” worth $60 million.

Floyd has not hesitated to display his jewelry collection. He owns around forty incredibly expensive watches. He has stated that he packs 30 watches on vacation and wears at least $3 million worth of jewels at all times.

In 2015, Floyd spent a staggering $18 million for a single Jacob the Jeweler watch. This timepiece includes 239 baguette emerald-cut diamonds weighing up to three carats apiece. The watch rightfully bears the moniker “The Billionaire.”

Floyd has avoided allegations of financial difficulties throughout the years. For instance, in March 2017, the IRS demanded $22.2 million in overdue taxes linked to Floyd’s 2015 revenue. Specifically, according to the IRS, he owes $22,238,255. As if that were not absurd enough, Floyd said he lacked sufficient liquid cash to pay the bill.

A few months later, Floyd’s attorney filed documentation guaranteeing the IRS that their bill would be paid in full, with interest and penalties, directly from his Conor McGregor earnings. The IRS sought immediate payment, to which Floyd’s legal team responded:

“Despite having large holdings, the taxpayer’s assets are constrained and primarily illiquid. The taxpayer has a substantial liquidity event scheduled in around 60 days from which he plans to settle the outstanding balance of his 2015 tax debt.”

50 Cent, Floyd’s former friend and now bitter opponent, said on social media in February 2020 that Floyd was broke and would need to return to the ring to replenish his finances. Floyd was quick to dispute these unfounded charges on his social media platforms. However, it must be acknowledged that Floyd’s lifestyle is quite expensive to maintain.

Between the mansions, automobiles, private jets, entourage, and more… He undoubtedly spends tens of millions of dollars annually, even though he no longer has a large salary. He never wears the same pair of shoes twice and leaves his discards for his fans, housekeepers, and hotel personnel.

He always travels with a 20-person entourage consisting of friends, relatives, security, a barber (even though his head is shaved), and a beautiful female massage therapist. Once, thieves stormed into his home and stole $7 million worth of valuables.

We have not even discussed Floyd’s gambling tendencies. It is impossible to determine whether Floyd has won or lost money betting on sports. Throughout the year, he routinely displays his extraordinarily high wagers at athletic events.

Floyd was accused in 2002 of two counts of domestic violence and one count of battery. For this offense, he received a six-month suspended sentence and community service. After being convicted of two charges of misdemeanor battery, he was handed a one-year suspended sentence in 2004.

After kicking a bouncer in 2005, he pled not guilty to a misdemeanor battery charge. He was given a suspended sentence of 90 days. Floyd was sentenced to 90 days in county jail in 2011 for assault charges. In addition, he was required to complete 100 hours of community service and enroll in a 12-month domestic violence program.

He ultimately served 63 days in jail. Floyd filed a petition for medical release while serving his term, claiming that the daily 800-calorie prison cuisine was causing his muscles to atrophy away. He stated that his body required 3,000 to 4,000 calories per day. The judge refused to comply. Floyd was picked up by 50 Cent on a private jet with luggage containing $1 million in cash upon his release.

It was his lowest earnings in the past decade when he often earned over $100 million every boxing match. Even though he is announcing his retirement for the final time, he has already done it three times.

His father was his manager and coach from the beginning of his existence until 2013 when Floyd Mayweather fired him from both positions? One year later, he returned as a coach.

As far as retirement is concerned, he is currently retired, but there is little confidence in his retirement because he first retired in 2007, then again in 2010, then again in 2015, and finally in 2020. Being a division champion is a major accomplishment in boxing, yet Floyd Mayweather holds that title with a record of 4-4. Also, see Beyonce’s and Kim Kardashian’s net worths.

The net worth of Floyd Mayweather is $450 million. As of the date of this writing, he has made over $1.1 billion over his career. He earned $250 million fighting Manny Pacquiao in May 2015. Floyd earned $300 million facing Conor McGregor in August 2017.

The Punisher Season 3 Release Date: Why Did Netflix Cancel the Punisher?