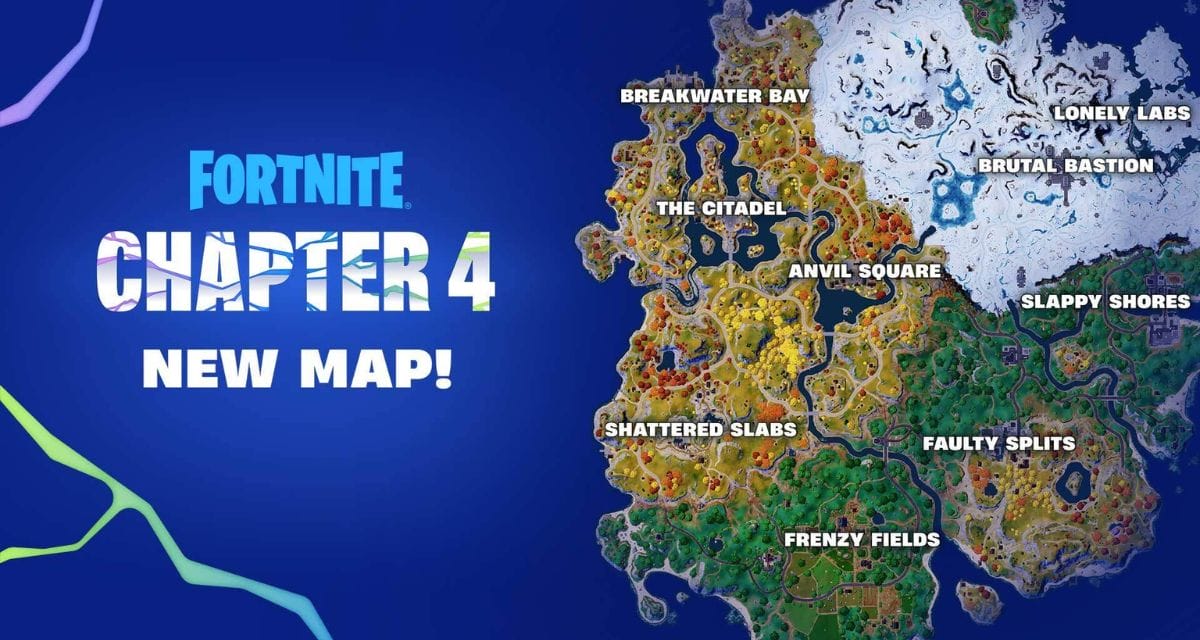 Fortnite Chapter 4: As part of the release of its newest chapter, Fortnite has received a brand-new map. In addition to the new battle royale island, the first season of Fortnite Chapter 4 includes new weapons, new abilities, and a new battle pass that includes Doom Slayer and Geralt of Rivia. The season began a day after Chapter 3’s conclusion and will conclude on March 10.

Epic has added a plethora of new weapons and a new dirt bike to the game’s arsenal, as well as modifications to its gameplay. The Reality Augments, which give each player in the match a random upgrade such as faster reloads for certain types of guns or the ability to redeploy your glider, are perhaps the most significant addition to the new season. These enhancements occur at random during each match, and players collect more random Augments as the match progresses.

This season’s battle pass includes a variety of unique skins and a few game icons. Players who purchase the pass will gain access to the Doom Slayer, the protagonist of Doom (2017), and Geralt of Rivia, the protagonist of The Witcher series, later in the past.

As usual, the battle pass will cost 950 V-Bucks (approximately $9.50) and will grant access to all premium rewards. There will also be a free version of the pass with a limited set of rewards that can be upgraded at any time to gain access to everything you’ve already earned.

READ MORE What is Kevin Games? Where Can I Play Squid Game?

There is no way to predict how long the new chapter of Fortnite will last, but Epic has been making chapters shorter and shorter recently. While the first two chapters lasted nearly two years each, Chapter 3 will conclude almost exactly one year after its release; however, it’s too early to tell if this will be Epic’s strategy for future chapters.

The Chapter 4 Season 1 Battle Pass contains an additional eight playable characters, V-Bucks, and dozens of cosmetic items that can be earned as you progress through the season.

This season is no exception, as Geralt of Rivia from The Witcher and the Doomslayer from Doom have both made their debut on the island. We are actively capturing images of every battle pass reward in the game, and you can find a complete list of them on this page.

Typically, a new chapter means a significant overhaul of the loot pool, and Chapter 4 Season 1 is no exception. This season, Fortnite introduces new weapons, including two new shotguns; it remains to be seen which is the fan favorite. Here is a comprehensive breakdown of all the new loot and weapons.

The new map is perhaps the most exciting aspect of a new Fortnite chapter. The Chapter 4 map completely revamps the Fortnite landscape, including the introduction of motorcycles, but there are a few references to previous maps that veteran players may enjoy discovering. For a comprehensive overview of the new map, please refer to this tour guide.

The Citadel is home to a formidable new foe. Here is how to defeat The Ageless Champion, who is the long-awaited IO leader Geno.

Each season of Fortnite since Chapter 2 Season 5 has added new NPCs, referred to as “Fortnite characters” by Epic, who roam the island and provide players with goods and services. We’ve located all fifteen of them, so use our NPC map and list as a guide.

Epic’s use of launch week challenges to mark the earliest days of a new season in Fortnite is relatively recent. Instead of waiting until Thursday to begin Week 1 challenges, launch challenges now provide players with a full extra slate of significant XP gains. We’ll walk you through these obstacles right here, so don’t worry.

Each season’s best firearms are Exotics and Mythics. Exotics are sold by NPCs, while Mythics are dropped by defeated hostile NPCs. We’ve located every unique weapon, so you may utilize our guide here.

This new, powerful melee weapon is guaranteed to be a hit; fortunately, you won’t be the target. Here are the locations of Shockwave Hammers and their uses. Hint: Have fun!

Chapter 4 will include a new Fortnite perk system called Augments that grants gameplay bonuses, and we’re preparing a guide to help you understand it. The following explains how things such as faster reloads and faster-sprinting functions.