Amazon Prime Video released Good Omens in 2019. This show is based on the novel Good Omens: The Nice and Accurate Prophecies of Agnes Nutter, Witch by Neil Gaiman, and the late Terry Pratchett. It follows an angel named Aziraphale (Michael Sheen) and a demon named Crowley (David Tennant), two friends who enjoy spending time on Earth and want to prevent Armageddon, the final battle between heaven and hell, from destroying it.

This six-episode series earned a great deal of love from critics, with Vinnie Mancuso of Collider stating that “Gaiman, who penned all six episodes, is honoring Pratchett’s adorable tendency to wander off on amusing tangents, asides, and footnotes.” A Christian group launched a petition to have Good Omens removed from Netflix, even though it was never on Netflix in the first place, due to the show’s irreverent humor about the Bible and other religious topics.

Even though Gaiman published a mini-episode titled Good Omens: Lockdown in the middle of 2020, the show was originally advertised as a limited series. However, Amazon has renewed Good Omens for a second season in 2021, and Gaiman will serve as co-showrunner once again. If you want to discover more about Good Omens Season 2, this handy, easy-to-read resource guide contains all the information you need. 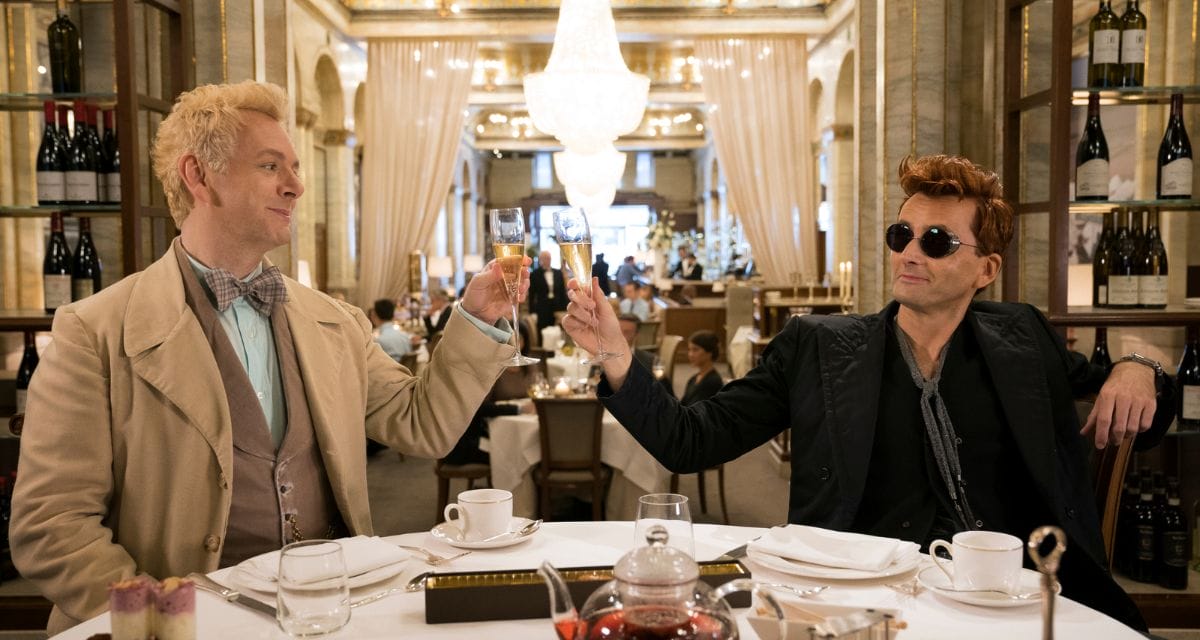 During the Good Omens Season 2 panel at the 2022 New York Comic Con (NYCC), it was revealed that the program will make its triumphant comeback in the summer of 2023. Even though Amazon has begun releasing new episodes of its shows on a weekly basis, it’s still unknown whether Good Omens Season 2 will be released weekly or all at once like the first season. Hopefully, we’ll find out in the coming months.

Who is in the Good Omens Season 2 Cast?

Any series’ ability to succeed or fail is greatly influenced by its performing cast. When choosing the best performers for the show, the creators must exercise caution. Fortunately, in the case of Good Omens, actors like David Tennant as Crowley, Michael Sheen as Aziraphale, Sam Taylor Buck as Adam, Daniel Mays as Arthur Young, and many others were carefully considered.

According to Neil Gaiman, this series isn’t solely or even mostly based on the novel. Once, Gaiman and Pratchett discussed writing a follow-up to their joint project. “Terry Pratchett and I laid in our respective beds in a Seattle hotel room at a World Fantasy Convention and plotted the sequel 32 years ago,” Gaiman told TVLine. “It’s 31 years since Good Omens was published.”

The book was given the amusing title 668: The Neighbor of the Beast. Gaiman went on, “We received our angels from the sequel, so I got to utilize some of it in Good Omens. Terry isn’t here anymore, but while he was, we discussed our plans for Good Omens and the direction the plot should take.”

He told Digital Spy that the concepts included “growing into paradise and hell.” Jon Hamm stated, “Gabriel (from the movie) isn’t in the book, but he and the other angels, as well as a number of the other demons, come from all the chats Terry Pratchett and I had about what we would do in a second book.” Therefore, it would appear that the brainstorming process was over before any ideas were even considered for display on a screen.

Is There a Trailer for Good Omens Season 2?

Amazon has not released a trailer for Good Omens Season 2 as of this writing, however, a clip was shown at the show’s NYCC 2022 panel. According to Maggie Lovitt of Collider, this brief film depicts Aziraphale and Crowley talking with a new individual who may play a significant role in the upcoming season.

How Many Episodes Are in Good Omens Season 2?

Similar to the first season, Good Omens Season 2 will consist of six episodes, so Neil Gaiman and the team will presumably once again convey a clear and simple story.