Given Netflix’s current financial condition (it suffered a $50 billion loss), we understand that the streamer is considerably more concerned with generating buzz for a new Harlen Cohen adaptation. And we almost forgot about it, save for the author’s Twitter announcement to his fans. But before we get into the fans’ and reviewers’ reactions to Netflix’s Hold Tight, let’s take a look at the show itself.

What Are the Critics Saying?

“Hold Tight on Netflix eventually delivers the twists, but it seems rather lackluster.” Ready Steady Cut It struggles significantly in the fourth and fifth episodes as it tries to tie up loose ends, but there are enough fascinating story aspects to keep viewers involved. Having that youthful drama vibe without overwhelming the listener with dialogue is also beneficial. Hold Tight is another excellent adaptation of a Harlan Coben story.”

According to Heaven of Horror, “although Hold Tight is still a murder mystery and people do die, the primary focus is on everyday difficulties rather than murder.”

This is the seventh adaptation of the story. Apart from that, Safe, Stay Close, Gone for Good, The Stranger, The Woods, and The Innocent are all available on Netflix. However, there will be more. He had too many books and had already inked a deal with the streamer for 14 projects!

What Is the Plot of the Series?

The six-part series is based on the same-titled book by the popular author. It was a Polish production titled Zachowaj spokój at the time.

The plot is mostly a criminal mystery. The latest Coben adaption centers on Adam, a despondent young kid. Adam has been distraught by the death of his friend Igor. However, he appears to be knowledgeable about it. And he becomes increasingly distressed, which causes his mother concern. It quickly becomes increasingly twisted, with a conspiracy at its center. 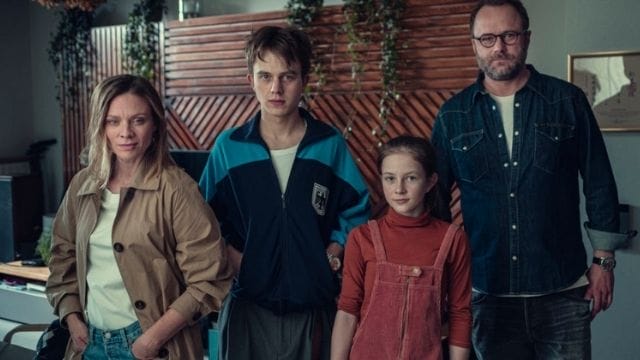 Hold Tight chronicles the story of Anna Barczyk, a mother who embarks on a perilous journey to locate her son, Adam, who went missing shortly after his friend was found dead. Anna looks for answers in uncharted places, some of which pose a threat to her own life, determined to discover her child’s whereabouts. Nonetheless, she sets out to discover the truth and, perhaps, locate her missing son.

All of this and more can be seen in the official trailer for the upcoming Netflix limited series, which you can watch below.

Magdalena Boczarska, who starred in The King of Warsaw, plays Anna Barczyk, Adam’s tragedy-stricken guardian. Along with Boczarska, there are additional great actors.

Along with Grochowska, Autumn Girl actor Leszek Lichota stars in the drama series as Michal Barczyk.

Today, Netflix offers six episodes of the title, all of which are under an hour in length. If this sounds like an easy binge, hop over to the streaming service and watch every second of Hold Tight.

Go on Netflix, watch Hold Tight, come back, thank me, then finish the first episode.

Hold Tight on Netflix is a fucking rollercoaster lmao

Looks like another thrilling mini series… he can definitely write! Recommended so far

been watching ‘hold tight’ on netflix and nika is AMAZING. So fucking brave, not only did she get out, but she injured her attacker, AND went back to help them identify the building where she was kept. Fucking kudos, love her.

Where Was Hold Tight Netflix Filmed?

Hold Tight is the latest adaption of Harlan Coben’s novel and, like The Woods, is set deep in the heart of Poland. Our scene is a modest Warsaw suburb, and the series is comprised of two ongoing mysteries that interweave to form a fairly lukewarm six-episode run.