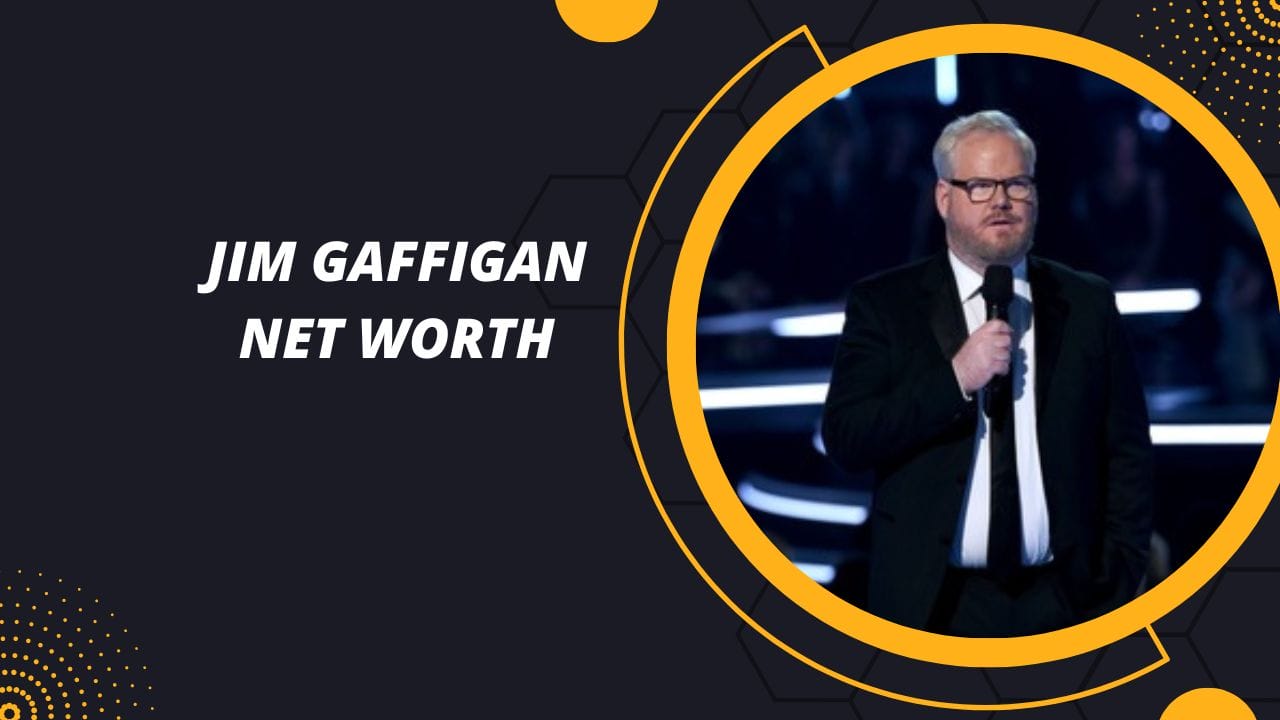 Jim Gaffigan Net Worth: American stand-up comedian, actor, and author Jim Gaffigan has a net worth of $30 million. Jim has become one of the highest-paid comedians on the planet in recent years. In a year of touring, his earnings can surpass $15 million to $20 million.

James Christopher Gaffigan was born in Elgin, Illinois on July 7, 1966. His parents are the charity worker and fundraiser Marcia Mitchell and the former president and CEO of the Mercantile National Bank of Indiana, Michael A. Gaffigan. He was raised with his siblings in Chesterton, Indiana. His mother died of cancer in 1990, and his father died of cancer in 1999.

During his teenage years, Gaffigan frequently watched “Saturday Night Live” and other comic programs. His father was the first member of his family to attend college, and he frequently urged his children to pursue “more secure” careers through education. However, Gaffigan understood at age five that he intended to pursue a career in acting.

He was a member of the football squad at La Lumiere School in La Porte, Indiana, where he attended school. He pursued his schooling at Purdue University for one year before going to Georgetown University. In 1988, he graduated from Georgetown with a degree in Finance.

Following graduation from college, Gaffigan worked briefly as a litigation consultant. Then, in 1990, he relocated to New York in pursuit of a comedy career. David Letterman, who is also from Indiana, was a major inspiration for him during this time. In New York, Gaffigan worked in advertising during the day and attended acting school at night.

Then, after attending a seminar on stand-up comedy, he fell in love with it and began performing in comedy clubs. The initial seven years of his career were spent experimenting with various styles. After auditioning for “The Late Show with David Letterman” numerous times over six years, he was eventually allowed to perform on the show. His successful and well-received stand-up performance helped him launch his career in earnest.

In July 2003, Gaffigan married actress Jeannie Gaffigan (née Noth). The couple has five children together. Jeannie is a frequent collaborator with Gaffigan, assisting him with the creation and revision of most of his work. She is listed as a writer and/or producer on a number of his comedic works, two novels, and a television program.

David Letterman was so delighted with Gaffigan’s debut performance on his show that he hand-picked him to create a sitcom for the production company World Wide Pants, which is owned by Letterman. Gaffigan’s subsequent popularity came as a guest star on several hit television series, including That ’70s Show (1998), Sex and the City (1998), Third Watch (1999), Ed (2000), and Law & Order (2003). (1990). In 2012, Gaffigan was featured by Rolling Stone as one of the “25 funniest people on Twitter” due to his amusing tweets, which won him over 2 million followers.

Gaffigan is also well-known for his voice-over work. From 2005 through 2008, he portrayed an animated version of himself alongside Conan O’Brien on “Pale Force.” In 2007, he was nominated for a Daytime Emmy for Outstanding Broadband Comedy Program. Other shows in which he has provided the voice of a character include “Bob’s Burgers,” “Shorty McShorts’ Shorts,” “Wordgirl,” and “Star vs. the Forces of Evil,” as well as the animated film “Duck Duck Goose.”

Gaffigan is a best-selling author of published works. His first book, “Dad Is Fat,” was published in 2013 and debuted at No. 5 on The New York Times’ list of best-selling books. The book’s title was drawn from the first complete sentence his eldest kid wrote on a dry-erase board when he was four or five years old.

“He presented it to me, and I laughed, and then I adopted him,” Gaffigan remembered in an interview. The book is a collection of writings about the author’s childhood and the upbringing of his children. In June of 2013, Gaffigan signed a contract with Crown Publishing to create a second collection of comedy essays. In 2014, “Food: A Love Story” was published.

Jim Gaffigan grew up with a large family in a little house. He has always made jokes about it in his numerous shows. However, he currently resides in a mansion in Manhattan with his family. The home is reportedly worth millions of dollars. There are no rumors of him possessing any other pricey items.

Jim Gaffigan’s humor is his primary source of income. His comic performances have been a success, and people worldwide enjoy them. He also works as an actor and has been in several films, which helps him earn a substantial income. He is also an analyst for CBS and a published author. Several brand endorsements also contribute to his income.

How Much Does Jim Gaffigan Make Per Show?

Although it is unknown exactly how much the comedian earns every performance, we know that his annual income from stand-up shows is over $1 million. In addition, since 2018, his net worth has increased by $20 million.

Fans frequently say that Gaffigan resembles their cats, which is somewhat peculiar. Even worse, he has been compared to a kneecap and a large baby by some.

What is Jim Gaffigan’s net worth?

Who are the parents of Jim Gaffigan?

James Christopher Gaffigan, a multitalented comedian born into a Barrington family, is the son of Michael A. Gaffigan and Marcia.

What is the number of Jim Gaffigan’s children?

What is Jim Gaffigan’s marital status?

What is Jim Gaffigan now doing?

Jim Gaffigan has continued to perform and excite his audience.

When did Jim Gaffigan begin acting?

Jim Gaffigan’s estimated net worth in 2022 is approximately $30 million. He began his career in supporting parts before transitioning to stand-up comedy. He has been in numerous films and produced comedy series. Reportedly, his current annual income and salary are approximately $2 million.

His comedy consistently resonates with the people, which has made him so successful. He has also received numerous prizes and distinctions, including an honorary doctorate. He is an author as well. He has a wife and five children. He currently resides with his family in Manhattan.

Sonic the Hedgehog 3 Movie Release Date: a Knuckles Spinoff Series is Also in the Works