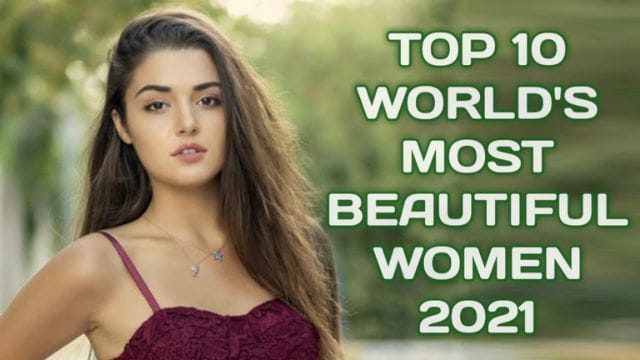 The definition of beauty changes throughout time, but as H.G. Wells stated, “Beauty resides in the heart of the observer.” In this post, we’ve produced a list of the fifty most beautiful women in the world so that you can experience the enchantment they’ve created through their work or auras.

However, one must remember that beauty goes beyond the surface. Your character reveals the actual beauty of your soul. Consequently, it is a fundamental error for ladies to equate attractiveness with their physical looks. Each of God’s creations has a certain allure; it just takes the appropriate pair of eyes to notice it.

Therefore, let us be inspired by these most beautiful ladies in the world to see the beauty within ourselves. Continue to scroll down.

Awards and Achievements: She has received several awards including the National Film Award and five Filmfare Awards

In 2000, Priyanka Chopra was crowned Miss World. She is one of India’s most renowned actors. Initially, she desired to study aeronautical engineering, but once amazing prospects presented themselves in the film industry, she shifted her focus. Her notable works consist of Barfi, Bajirao Mastani, Fashion, and Mary Kom. She began acting in the ABC television series Quantico in 2015. She is one of India’s highest-paid actresses and is also well-known for her charitable endeavors. She was named one of the 100 most important people in the world by Time magazine.

Awards and Achievements: With a total of 22 awards and 62 nominations from the Grammys for her music (as a solo artist and with Destiny’s Child), she is the most nominated woman and the second most-awarded woman in Grammy history

Beyonce, widely known by her fans as “Queen B,” is one of the most popular and famous performers in the world. Nobody has been able to match her mesmerizing singing and dancing abilities. She is an international brand. She is married to Jay-Z, a prominent hip-hop artist.

Awards and Achievements: She has been awarded the Padma Shri by the Government Of India and she has also won numerous other awards and accolades

Aishwarya Rai appears on nearly every list of “most beautiful women in the world.” In 1994, she was crowned Miss World. She made her acting debut in Iruvar, a 1997 Tamil film directed by Mani Ratnam, and Aur Pyaar Ho Gaya, a 1997 Hindi film. She has appeared in more than forty Hindi, English, Tamil, Telugu, and Bengali films.

The most attractive and multitalented lady Halle Berry began her career as a model before becoming one of the highest-paid actresses in Hollywood. Halle is the only African-American actress to have received an Oscar for a leading part, which she received in 2002 for her performance in Monster’s Ball.

Angelina Jolie is the hottest woman in history. She is reportedly the highest-paid actress in Hollywood. She rose to prominence after starring in the Lara Croft blockbuster films. She also actively works on problems about the rights of children, humans, and women. She established the Jolie-Pitt Foundation, which contributes to humanitarian causes worldwide.

Awards and Achievements: She won the Teen Choice Award for Best Breakthrough Performance among others

Lively is best known for playing Serena Van Der Woodsen in the popular television series Gossip Girl. Additionally, she has appeared in films such as Sisterhood of the Traveling Pants, Green Lantern, The Age of Adeline, and The Shallows. She is currently married to actor Ryan Reynolds.

Her performance in Lost in Translation earned her the BAFTA and a Golden Globe nomination.

Scarlett Johansson is the world’s most beautiful girl. She is an American model, singer, and actress. She began her acting career while still a child. Her breakthrough performance came alongside Bill Murray in the film “Lost in Translation.” ScarJo effectively portrayed a 25-year-old at only 18 years old. Among her other well-known films are Vicki Cristina Barcelona, Lucy, and Don Jon.

Awards and Achievements: She has received several awards including three Filmfare Awards

Awards & Achievements: Model of the year, Social Media Star of the Year

Despite being in her early 20s, Bella Hadid has built quite a reputation. She is the most beautiful girl in the world, based on the Golden Ratio of Beauty Phi (a scientific measurement of physical perfection). This young model is both beautiful and intelligent, and she certainly understands how to walk the runway and attract all attention. Her sculpted chin and long legs are comparable to those of the industry’s top models. Her friends and family report that despite her tremendous recognition and success, Bella is quite modest and appreciates the little things in life.

Zozibini Tunzi is the center of all attention as the 2019 Miss Universe winner. In addition, she is the first black woman with afro hair to win the title. Her determination to combat gender stereotypes and raise awareness about gender-based violence is motivating and admirable.

When asked what is the most essential thing we should teach young ladies today, she captivated the hearts of people throughout the world by responding, “Leadership… Nothing is more important than securing your place in society and establishing your identity.”

Rather than physical appearance and skin tone, beauty resides in one’s moral qualities. This list of the world’s most attractive women includes fashion models, actresses, directors, singers, fashion designers, and athletes. All of these remarkable women have tremendous determination and passion for their work, and they have given their all to achieve success in their respective fields. Through their knowledge and beauty, each of them has left an indelible impact on the international stage. We hope that you are inspired by these gorgeous women.

Taylor Swift New Album Release Date: What is the Album About? Are the Songs Based on…