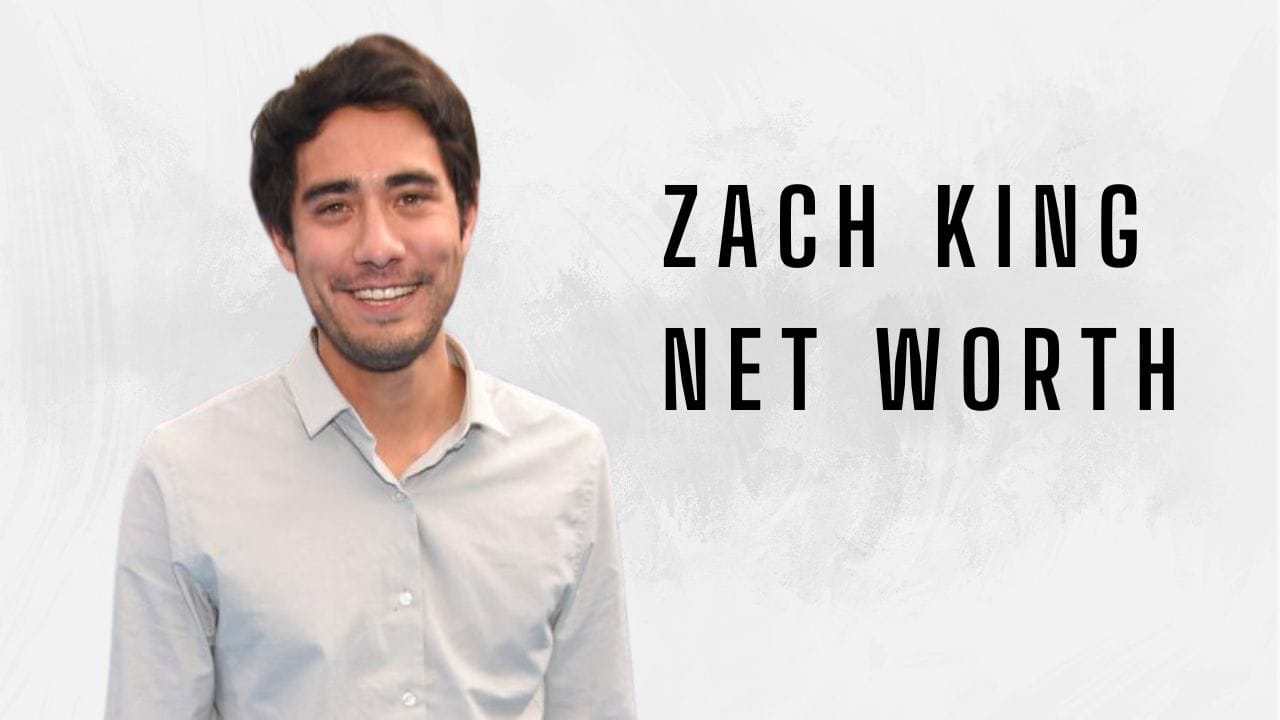 Zach King’s Net Worth: How Much Does He Earn on Social Media?

He is a social media personality, YouTuber, and Vine star from the United States. Zach King is best known for his TikTok account, where he has millions of fans who eagerly await his new videos. The magic vines’ he created, which are 6-second videos digitally manipulated to appear as though he is performing magic, helped him achieve notoriety.

Zach King is now an internet star, especially since he is well-known among young people. The majority of his Vines became viral, allowing him to amass millions of followers. People all over the world have viewed Zach’s videos due to his incredibly popular, original content.

He has around 25 million Instagram followers and over 66 million TikTok followers. Here is everything you need to know about Zach King’s complete Net Worth, including his income, assets, earnings, different brand affiliations, luxurious lifestyle, profession, biography, and additional interesting facts.

Zach King’s net worth is approximately $5 million in 2022. He has earned his name as one of the leading content creators in the United States through his diligence. After witnessing so much excitement, the first thing that comes to mind is, “What are Zach King’s sources of income?”

The majority of his income is generated via his YouTube channel, which has over 12 million members. His original content made him a millionaire, and each year his net worth increases.

The annual pay of Zach King exceeds $450,000. He also earns a substantial amount of money from brand promotions, sponsorships, and advertising. Zach is an inspiration for millions of people who aspire to become YouTube celebrities.

Zachary Michael King was born in Portland, Oregon, the United States on February 4, 1990. On his mother’s side, he has Nicaraguan and Austrian ancestry. On his father’s side, he has Chinese ancestry. Zack’s mother homeschooled him and his three sisters, one of whom was adopted. He graduated from Biola University in December 2012 with a degree in Cinema and Media Arts.

At age seven, Zach developed his hobbies and began making videos. When Zach was 14 years old, he took his love more seriously and purchased video-making equipment, including cameras, a tripod, a Mac, and a computer.

Zach King wed Rachel King in 2014, and as of 2016, the couple resided in the Rossmoor area. King and Rachel welcomed their first child, a son named Liam Michael King, on July 4, 2018. In addition to having fostered and adopted children, the couple also has a biological son.

In 2008, Zach began his profession by founding his website, FinalCutKing.com. King gave online training and guidance for utilizing the ‘Final Cut Pro editing software. His website was one of the few on the Internet that provided tutorials for editing software at the time. Then King joined YouTube and began releasing filmmaking tutorials.

Soon after gaining a large following on his website, he began to sell seminars and utilized the proceeds to cover his college tuition. After gaining popularity, King was featured in an episode of the Syfy program Viral Video Showdown. On January 16, 2009, he created the YouTube channel FinalCutKing and released his debut video, titled Jedi Kittens, alongside his college buddies.

According to YouTube, Zach King was one of the 25 most promising new filmmakers in the United States in 2013. In the same year, he began uploading Vines and within thirty days had amassed an enormous fan base.

In February 2016, King and his wife Rachel competed in the 28th season of the reality game show ‘The Amazing Race,’ but they were eliminated from the competition after a while.

King began posting videos on TikTok in 2016, and he currently has over 66 million followers, making him the seventh most-followed individual on that network.

In 2010, he also won the Hewlett-Packard commercial competition and attended the London Film Festival. Despite this, he made his television debut on Zinor Layla in 2014, and his film debut by delivering vocals for the film Zootopia. Zach King most recently participated in the Mrbeast Creator Games 3, where he placed second and earned $1 million.

How Did He Become So Famous?

Zach decided to take matters into his own hands by founding the website FinalCutKing.com in 2008 because he struggled to locate good online training for Apple’s “Final Cut Pro” editing program. This allowed him to provide training and recommendations for using the software. Simultaneously, he launched a YouTube channel where he taught his fans how to edit videos.

His lessons helped him establish a consistent following until he was able to sell training seminars and use the proceeds to pay for education. Early in his career, Zach King immersed himself in the role of educator for other creators. By identifying a lack of online resources and sharing his talents, he developed his competence. He gained a following that would allow him to profit from his creative work in the future.

Zach King’s net worth began to gradually increase shortly after he began earning money from filmmaking. But what he didn’t anticipate was becoming a viral sensation with just one video.

Zach uploaded a video titled “Jedi Kittens” on his YouTube account in January 2011. It depicted two kitties fighting with lightsabers, and in just three days, it received over one million views. Consequently, he chose to post two additional sequels. Each video received more than 27 million views, prompting YouTube to name him one of the 25 most promising new filmmakers in the United States.

Zach won the YouTube NextUp Creators challenge in the same year and received $35,000 in financing for video creation and coaching. This also afforded him the chance to attend a four-day YouTube Creator Camp in New York City, where he could demonstrate his expertise in filmmaking in further detail.

In 2013, Zach King’s mind-bending images found a new home on Vine. With over 3.4 million followers, the short-form video platform was the ideal venue for Zach to demonstrate his six-second editing expertise.

As he began posting one Vine per day for thirty days, his popularity soared significantly. Zach King’s net worth also began to expand as a result of product placements and brand sponsorships in his films. Even today, compilations of his most popular Vine videos continue to get millions of YouTube views.

Zach chose to sign up for Musical.ly in 2016 after Vine was discontinued (later renamed to TikTok). His first film depicted him escaping from prison by flinging himself against the bars.

While he was able to maintain his success on TikTok, it wasn’t until three years later that he became one of the most prominent online creators. He was responsible for posting the video with the most views on the platform. The film eventually received an estimated two billion views online, hence increasing his net worth.

How Much Does He Earn On Social Media?

Zach’s excellent career is primarily attributable to his ability to swiftly learn several platforms. By creating content that showcases his particular style of video magic, he has maximized every video-sharing application to raise his net worth. Zach King’s YouTube channel has had more than 1.7 billion views to date, allowing him to derive a significant percentage of his revenue from YouTube commercials alone.

Zach should have been able to quickly capitalize on the popularity of his first viral video, given that content creators from the US, UK, Canada, and Australia are often compensated $2 to $12 per 1,000 monetized views on YouTube. Zach’s channel continues to attract an average of 1.6 million views each day, allowing him to collect approximately $13,000 per day in advertising revenue. This corresponds to the expected annual revenue of over $4.7 million.

Partnerships also contribute significantly to Zach King’s wealth and income. He has collaborated with brands such as Chrysler, Lacoste, and Buick to advertise their products in his videos over the years. When it comes to branded material, Zach attributes his financial success to his speed and originality; he can complete a job in a week or two when it typically takes others considerably longer. These brand deals likely earned hundreds of millions of dollars, greatly increasing Zach King’s overall net worth.

As one of the most followed creators on TikTok, Zach can create a substantial income from his material on the platform. According to reports, he earns between $25.075 and $41.779 per TikTok post.

It is essential to emphasize, however, that his TikTok fame was developed solely on the strength of his substantial following on other platforms, including YouTube and Vine – and the following he built by teaching editing. This edge allowed him to set greater prices than the average TikToker, allowing him to rapidly increase his net worth.

Zach is also recognized for hosting speaking engagements at a variety of business events, fundraisers, social media campaigns, and private parties. According to reports, he charges between $50,000 and $100,000 for every event, which, depending on the number of speaking engagements per month, might amount to a substantial income. By appearing on shows such as Good Morning America and The Ellen DeGeneres Show, Zach has achieved a degree of fame that makes it simpler for him to secure high-profile speaking engagements.

In addition to earning money through social media, Zach also produces short films for his firm, King Studio. The Los Angeles-based production studio has collaborated with internationally renowned companies like Walt Disney Studios, Coca-Cola, and Universal Pictures. Even though his fees may fluctuate from project to project, it is evident that his studio has maximized Zach King’s net worth and overall revenues.

Zach’s first book series, named “My Magical Life,” was published shortly after he invented the technology for storytelling. The trilogy, published by HarperCollins, retails for approximately $18 and includes an augmented reality app that brings the illustrations to life in three dimensions. These other endeavors have contributed to Zach King’s success as a content creator and entrepreneur, as his net worth demonstrates.

Zach King is one of the world’s leading content creators, and he has endorsed numerous brands, including McDonald’s, Shoe Carnival, LG, McCafé, Kings Brioche, and many others.

Zach King’s net worth is approximately $5 million in 2022.

How much does Zachary King earn annually?

What is Zach King’s age?

Which woman is Zach King’s spouse?

If you enjoyed this section in which we discussed Zach King’s net worth and biography, we’ve reached the end of the article. Then, immediately share this informative article with your friends and on social media platforms. In exchange for your comments and message, we will provide you with a piece of exclusive, complete information. Thanks.

Baby Keem Net Worth: What is Baby Keem’s Annual Salary?

Mc Lyte Net Worth: What is Mc Lyte’s Annual Salary?